When poet and memoirist Kathryn Rhett nearly lost her newborn daughter to a serious illness, she managed to find comfort in the stories of others who had suffered loss and crisis, and in the assurance these accounts gave her that she was not alone. Whether or not their struggles were similar to her own, Rhett discovered that the experience of crisis is universal, and the process of enduring and recording life-changing trauma leaves behind a chronicle of strength.

Hopeful and deeply moving, Survival Stories celebrates the memoir as an art form, as well as the human instinct to survive and adapt to adversity. Throughout, twenty-two extraordinary writers, including Jamaica Kincaid, Rick Moody, Lucy Grealy, William Stryon, and Isabel Allende, reveal, as Kathryn Rhett writes in her introduction, that “our life-writing is a passage through grief to knowledge.”

Rhett noticed that the most arresting essays written for the memoir-writing workshops she taught were about surviving crises. This observation inspired her to create a crises memoir course, in spite of her fears that such an intense focus could turn her classes into group therapy sessions. A real pro, Rhett was able to concentrate on the writing itself, thus helping her students develop the formal structures needed for telling their highly personal stories. Rhett scouted out stellar examples of the form and now has gathered together in a powerful anthology 20 indelible tales of death, illness, divorce, betrayal, depression, and unemployment by writers such as Rick Moody, Lucy Grealy, Nancy Mairs, and Christina Middlebrook. Each essay reflects points Rhett makes in her insightful introduction about how stories of survival illuminate “the connection between an old self and a new one” and about how the articulation of private traumas is a “step toward collective feelings.” The memoir is as maligned as it is treasured, but these essays transcend all criticism. Donna Seaman

Twenty-two fine essays, some never before published, mark episodes of life-changing loss or illness and the redemptive movement toward reconciliation. Developed from Rhett’s course in crisis memoir–or survival stories–at the Iowa Summer Writing Festival, the anthology features works that encompass the distinctive elements of the form: the “inclusion of present and past, narrative and digression,” and an “urgency” that the work be written, which reveals itself in a sense of discovery for both writer and reader. The contributors include both well known writers, such as Lucy Grealy, Natalie Kusz, and William Styron, and newer voices, including Patton Hollow and Laura Philpot Benedict. Subjects span family deaths, abuse, illness, divorce, infidelity, physical disfigurement–all the sadder stuff of life. The events themselves are rendered dramatically or elliptically, as needed. But it’s the observations that linger in the memory: Richard McCann’s glimpse of a bereaved mother examining old photos, Alan Shapiro’s vision of death, Nancy Mairs’s encounter with grace. Steering clear of the potential dangers in the single-subject anthology, Survival Stories sustains interest with its variety of emotions and its many kinds of resolution. Years after his cancer, Reynolds Price analyzes his handwriting and his life and finds both “taller, more legible, with more air and stride.” Months after her death, William Loizeaux awaits the consolation of the sudden presence (“the strange sense of proximity, the smell of her skin in the air”) of an infant daughters; such moments, he has read, happen for those who grieve, but it does not come for him. Most important (and surprising), the immediacy and artistry of these works also inspire understanding, or at least companionship, though those seeking a religious dialogue or presence will for the most part need to look elsewhere. Measured and full of affecting essays, this is ideal for readers itchy to read beyond the Best American Essays collections and sustaining to those in hard straits themselves.– Copyright ©1997, Kirkus Associates, LP. 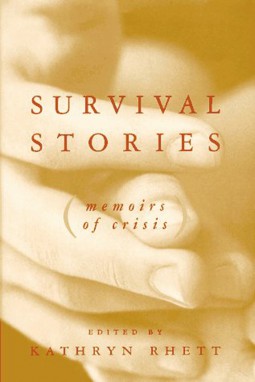