Near Breathing is the story of a difficult and transformative birth experience. Rather than the ‘perfect birth’ the author can later imagine, she and her husband instead experience the near-death of their infant daughter. As the baby is attended by a bewildering team of specialists in the neonatal intensive care unit, attached to a respirator and other machines, Kathryn Rhett finds that she is forced to confront her own ideas about bravery and beauty, family and love. Beginning with labour and delivery, Rhett describes her experiences in clear-eyed detail. She finds that she herself is hardly breathing as she sits by her child’s bed in ICU, attending to the strange duties of mothers in situation: making phone calls, reading medical articles, handling family visitors, and pumping breastmilk for a day when her baby might drink it. Life has constricted to a flourescent-lit room filled with monitors. Only later, when her daughter comes home, can she begin to articulate the significance of what has happened. Near Breathing is a love letter, from a mother to the daughter she nearly lost.

from The Charlotte Observer

“It’s a gripping book–brilliantly written–and you will be riveted by the suspense and drama.  And it’s a joyful book. Every mother should read it.  Every father, too. In the end, it makes us feel grateful for what we have. It makes us want to draw our sons and daughters close and touch their faces.  because we can.”

“Nothing is simple here, nothing is gushy or melodramatic.  And for that reason, the real ways that humans act under great stress is illuminated and, in effect, ennobled. This is a terrific book and a stellar addition to our growing body of meaningful memoirs.”

“Reams have been written about the awesome beauty of labor and birth, but far less about the emotions churned up when something goes awry. Kathryn Rhett, editor of a remarkable anthology entitled Survival Stories, distills the suffocating days she stumbled through with her husband, Fred, after their newborn daughter, Cade, was swept off to the neonatal intensive care unit. “I had a baby and six days later I held her,” Rhett writes. “I had a baby and nursed her seven days later. Eight days later she held my finger.”

Although the reader knows from the beginning that Cade survived, Rhett’s supple prose channels the ragged edge of fear dredged up by watching a baby hooked up to life support with no guarantee of a happy, or even tolerable, ending. –Francesca Coltrera, amazon.com 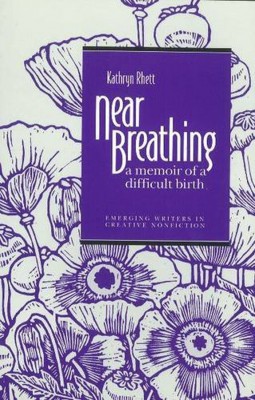